What local icon was raised in Latin America, played a role in the Eighth Wonder of the World; became a glamour star after she turned 100; has been likened to specialty head ware; and will celebrate her centennial year of service to the City Ada next year?

The answer is Ada’s blue, “witch-hat” water tower directly behind Ada Middle School between S. Townsend and S. Broadway. The lady in blue has stood at that location since 1918 as a water tower serving the city gracefully for almost a century.

It has symbolized Ada as a landmark since when it was first erected at the site near 20 th Street and Townsend, but received a skyrocket boost in fame in 2014, when it was on the cover of country music star and Ada native Blake Shelton’s album, “Bring Back The Sunshine.”

Though it has been an iconic symbol of home for generations of Adans, the water tower has not always been where it is today. Ada city officials say it was first used by the U.S. government in Panama during the construction of the Panama Canal. The U.S. took over the construction of the canal in 1904 and completed it 1914, as it became known as the “Eighth Wonder of World.”

The City of Ada was in the market for a new water tower around 1905 but found it difficult to procure a new one because the U.S. was re-purposing steel mills for the war effort leading up to WWI. So, the City of Ada bought the tower second hand. It was completely dismantled in Panama and shipped through the Panama Canal to Chicago in 1906. After passing inspection from a Chicago-based iron and bridge company, it was brought to Ada, where it was reconstructed in 1918 at the current location, where the 123-ft. tall, 400,000-gallon tower stands today. It is called a “witch-hat” tower due to the distinctive peaked roof top, which was a common architectural feature of great homes also a century ago.

In 2015, the tower underwent a two-month face lift ahead of its 100th anniversary of service to Ada, as it still supplies water today to residents of that area of town. Although the City of Ada has added other higher capacity towers around the city, the blue “witch-hat” tower says “Ada” more than any other as an iconic landmark to residents and non-residents, as the album cover introduced it to a world-wide audience just in time for its 100 th anniversary of reliable service to Ada over the generations. 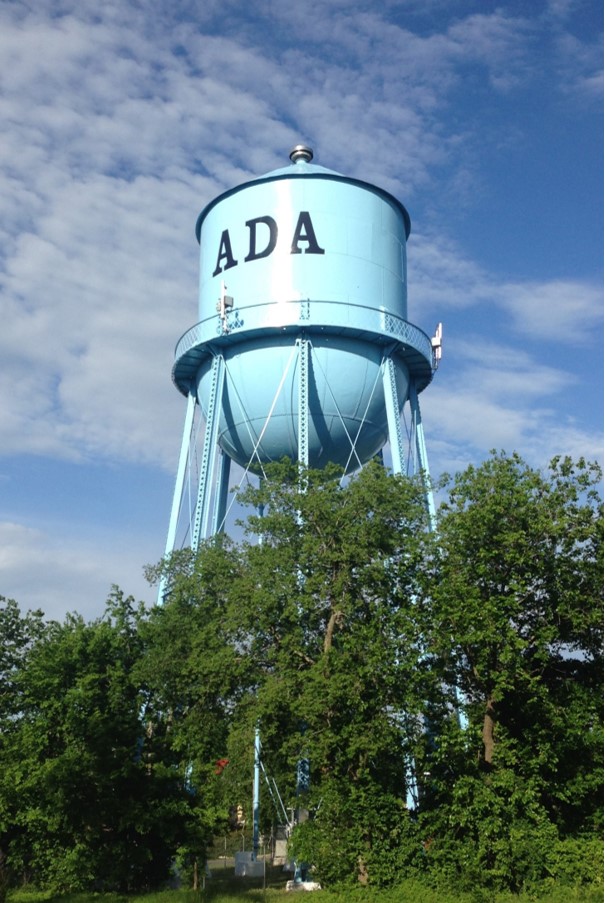